Most of you have probably heard of the concept of Meatless Mondays.  It was an international campaign started by the good people at the Johns Hopkins School of Public Health that encourages people to make healthier choices at the beginning of the week, and one of those healthy choices is to cut down on the amount of meat in your diet.

I’m not necessarily a Meatless Monday devotee, but I am cutting down on the amount of meat and dairy in my diet and trying to replace it with fruits and veggies.  Some days it’s easier than others, but as I learned from my failed juice cleanse, everything is better in moderation.

I took this Meatless Monday (Sunday, really) as an opportunity to try a new veggie-filled recipe from one of my favorite bloggers, Anne at Fannetastic Food.  I figured since she’s Anne and I’m Annie, it was only fair to invite my friend, also Anne, to reap the rewards of my cooking.

Best part of the recipe? Super simple and easy clean up.

You start by boiling the sweet potato in one pot, while combining all of the other ingredients in a skillet and sauteeing until the spinach is wilted.

After everything is cooked and the sweet potatoes are mashed, spread some of the potato onto a tortilla and pile on the veggies.  Roll up the tortilla and place it in a baking dish with a thin layer of enchilada sauce on the bottom. Repeat until you’ve used all the veggies and potato (it made about six for me), pour the rest of the enchilada sauce on top and cover with cheese and some fresh cilantro. 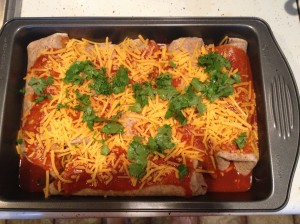 They are SO filling, which I didn’t anticipate since it’s mostly veggies and I’m more of a meat and pasta kind of girl.  I can’t wait to make these again!

You can find the full recipe at Fannetastic Food.  It gets a full seal of approval from all the Ann(i)es in Philly!

My Life in Pictures