I had one of the best weekends I’ve had in awhile.

Friday started out with dinner at Alma de Cuba.  If you haven’t been there, I highly recommend it.  Great ambiance and even better food.  After dinner, I headed over to the Academy of Music to see We Will Rock You! 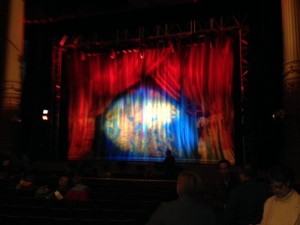 It is one of the most fun shows I have seen in awhile.  By the end, everyone is dancing and singing along with the actors.  Except for the Debbie Downer next to me, who wanted everyone to shut up.  His girlfriend was NOT pleased with his attitude. 🙂

I had to be up early for Unite on Saturday morning so I didn’t stay out too late on Friday.  The lovely Lauren picked me up for class which saved a lot of time and also kept me warm. 🙂  As always, the class was stellar.  I love leaving there feeling like I really gave it my all. After class, we went to brunch at Farmicia (also amazing!) and I saw the world’s biggest Celtic fan (not Boston, the soccer team).

After taking it easy and doing some laundry, I headed out for a relaxing night with my friends at the Cherry Street Tavern, which is a total dive and totally fun.  Luckily I controlled myself enough to make it to the 9am Run Like A Philly Girl meetup!

Between not running outside for awhile, the remains of a cold, and going out the night before, I was not prepped to tackle the 5 miler the girls were planning (it would be 7 when you add in me running to meet them and running home from the finish).  I told Allie, the organizer, that I’d just stick with them for 1.5 to make it a total of 3 for me.  Hopefully I’ll be able to tackle more when I go this Sunday!

I relaxed and kind of did school work on Monday, got dismissed at noon today due to the snow…it’s been an interesting weekend!  Sad my Unite class was cancelled today (it’s my favorite one of the week) but it’s not like I could have made it anyway!  Stay safe on the roads everyone!

My Life in Pictures